The probably best-known gold coin for investment, with an incomparable liquidity. Krügerrand was launched by the South African Mint in 1967 and became known as the first investment currency in the world. This edition is of 1 ounce fine gold. Until today, investors have bought 48 million ounce gold in over 60 million coins, making the Krügerrand one of the most popular and most traded 21st century investment gold coins. Krügerrand can be exchanged by thousands of coin dealers, financial institutions and investors worldwide. A good and classic investment coin. 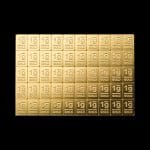