The Gold Maple Leaf is one of the bestselling gold coins in the world only surpassed by the South African Krügerrand, which testifies to the popularity of this gold investment coin. The coin was first manufactred by the Royal Canadian Mint in 1979 and is available in different versions. Since 1982, the purity of the coin has been 999.9, which distinguishes Maple Leaf from other bullion coins such as Britannia or Krugerrand. On the front of the coin the Canadian national symbol adorns the maple leaf, the Maple leaf which the coin is also named after. On the back is the portrait of Queen Elisabeth II, the back has been adapted since 1979. 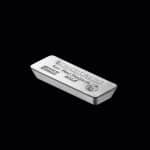