The Vienna Philharmonic is manufactured by Austria Mint since October 1989 and is named after the world-renowned orchestra, the Vienna Philharmonic. Since the introduction of the euro in 2002, the nominal details are allocated from Schilling to the new currency. Initially, the gold coin was available only in 1 ounce and 1/4 ounce, but later also 1/2 ounce and 1/10 ounce were introduced. The number of numbered coins varies from year to year. The coin consists of 999.9 pure gold. The motif has not changed since its issue in 1989, showing on the one side instruments from the orchestra and, on the other side, the famous organ in the Golden Hall. From the start, Philharmonic has been extremely popular with both investors and collectors, and is considered a classic among gold coins. 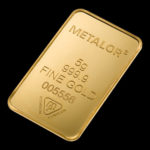